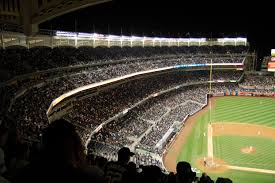 The New York Yankees WRAPPED UP a QUICK four game roadtrip in the South Side of Chicago against the White Sox. The series got off to a TERRIBLE start LOSING the first TWO games of the series, BOTH games which they LED in, but a SWITCH was clicked on Saturday Night, more on that LATER, and the Yankees look like World BEATERS again. It is NOT hyperbole to call this week the BIGGEST of the season for the Yankees as they take on their BIGGEST adversaries this season. The Tampa Bay DEVIL Rays and the Houston Astros come to town this week, who are BOTH teams the Yankees will need to GET THROUGH if they want to GET to the World Series this season AND they will be getting GREAT players in their line up this week.

Game ONE- After SPLITTING the doubleheader against the New York Mets, the Yankees had NOT been playing great as of LATE and NEEDED to get OFF the snide against the White Sox. They JUMPED to an 4-0 lead thanks to a TWO run HOME RUN by Brett Gardner BUT JA Happ, who was GREAT through the first FOUR innings just LOST it in the FIFTH and gave up FOUR runs to BLOW the lead. The White Sox scored ANOTHER in the SEVENTH to WIN the FIRST game of the weekend series.

Game TWO- The Yankees had lost TWO in a row and had CC Sabathia on the mound looking to get his 250th WIN. Luke Voit HELPED out CC Sabathia with a MOONSHOT in the FIRST but CC just did NOT have it, giving up FOUR in the BOTTOM of the FIRST and the Yankees COULD NOT get runs off of Lucas Giolito and LOST this one and needed to WIN the next TWO to SPLIT this series.

Game THREE- With their STARTING pitchers being TRASH in the first TWO games of the series, the Yankees went with an OPENER on Saturday night. Chad Green and Nestor Cortes Jr. were GREAT again and thanks to Gary Sanchez AND Gleyber Torres MADE SURE that the Yankees are now 5-0 in games started by OPENERS.

During the game on Saturday night, it was ANNOUNCED that Edwin Encarnacion had been TRADED from the Seattle Mariners to the Yankees in EXCHANGE of Juan Then, a prospect that was LOW on the list of the Yankees. Since that ANNOUNCEMENT of that trade, the FOURTH inning happened and the Yankees were able to WIN this one.

Game FOUR: The Yankees were looking to SALVAGE the FINAL game of the series and had James Paxton on the mound, who was TRASH in his LAST start and he pulled a 180 on Sunday. The BIG maple went SIX innings giving up just TWO runs and the offense did MORE than ENOUGH to give him the WIN and SPLIT the series.

Brett Gardner has THAT clutch gene!!! Gardner puts the Yankees in front with a two-out, two-run single! #YANKSonYES pic.twitter.com/T0QmNiwMRI

With TWO outs in the THIRD, the Yankees scored FIVE runs to grab the LEAD and did NOT look back on their way to WINNING their second game in a row.

The FOCUS now SHIFTS to the Tampa Bay DEVIL Rays who come to the Bronx for a THREE game set start tonight if the Mother Nature ALLOWS it as rain is in the forecast at around 7 PM tonight. REGARDLESS of the weather, this is a HUGE series for BOTH the Yankees and the DEVIL Rays as ONLY a HALF game SEPARATE the two teams ATOP the AL East with the Yankees having one FEWER loss BUT they have also played one LESS game than the Devil Rays.

The Yankee offense is going to get TWO huge ADDITIONS during the series with Edwin Encarnacion in the lineup tonight and Giancarlo Stanton coming BACK tomorrow. Encarnacion LEADS the American League in Home Runs this season, with Gary Sanchez being SECOND on that list. Aaron Judge AND Giancarlo Stanton were playing with AAA Scranton this past weekend who are GREAT home run hitters.

Now the ARGUMENT against this trade is going to be that the Yankees should go after getting some pitching BUT this trade makes it EASIER for them to go after pitching. The CORRESPONDING move to the Encarnacion trade was sending DOWN Clint Frazier and I think that was the LAST we have seen of him BARRING an INJURY because I think that he is the BAIT that is going to GO AWAY for a pitcher among OTHER prospects. You can NEVER have ENOUGH offense offense and pitching is ON THE WAY soon we just have to TRUST Brian Cashman.

The Yankees are historically GREAT during Hope Week, their ANNUAL homestand where they SPOTLIGHT different charitable causes within the organizations and guess when Hope Week is this year? That is RIGHT it is this week!

Going to be a FUN week in the Bronx this week.