I am DEAD inside 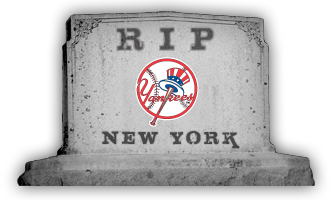 The New York Yankees combined to win TWO HUNDRED and EIGHT wins in the Regular season but the ONLY wins that matter are the ones that come in the Postseason and the Red Sox took the CROWN over the Yankees WINNING the ALDS in FOUR games. The Yankees had MANY chances to WIN the series but they NEVER capitazalied them and this series and season should be looked at as an EMBARRASSMENT for EVERY player and Front Office personnel on the team.

I am writing this post in the TOP of the NINTH inning of Game FOUR so I am NOT going to do the traditional series recap because my emotions are HIGH and I am PISSED OFF at EVERY single person that DAWNED the Pinstripes this season.

Scoring just TWO runs in TWO games in the Postseason is UNEXCUSABLE and they DESERVED to LOSE tonight to END their season. Game THREE was the WORST game in Franchise History and today was NOT far behind.

I personally find the rhetoric of this being the NEW age SOFT Yankees, ANNOYING but tonight I have to TIP my cap to them because the team was TRASH over the past TWO nights at HOME and that is RARE for this Franchise.

I will have a FULL Exit Interview style blog for the 2018 season coming in the next few days, but in the ALDS, EVERY single person was TERRIBLE.

Congrats to the 2018 World Series Champs, the Boston Red Sox who had a TON of holes this series, but the Yankees NEVER capitalized on them and that is why the Yankees will be watching the ALCS between the Red Sox and the Houston Astros from their couches.

It is NO longer #WetDreamCity, but it is STILL #RedSoxYear.