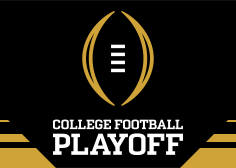 The debate has finally ended, or has IT? The College Football Playoff committee once again showed that they have no SPINE in their back and went with the safest pick possible for the FOURTH and Final spot in the Playoff. There was a debate between THREE teams, Alabama, Ohio State, and USC for that LAST spot, and the Crimson Tide of Alabam got the NOD. The committee did not even consider UCF, the ONLY undefeated team in the FBS for that spot, which shows that the committee does not like to face criticism.

Going into Championship weekend, I had said, that  even though the Playoff picture was MURKY, it could be solved on the field. Three of the four teams did what they had to do ON THE FIELD and punched their TICKET for the College Football Playoff, HOWEVER the last game of the weekend did not go the way the committee would have liked, an they were forced to use their BRAINS to come up with the FOURTH team in the Playoff.

Clemson went into this weekend as the TOP RANKED team in the country and they knew that if they won the ACC Championship game, they would be in the Playoff. Clemson BLEW OUT Miami last night and there was NO DOUBT in the minds of the committee and its critics that Clemson should be ranked #1 in the final rankings for the College Football Playoff, I have no issue with Clemson getting IN to the Playoff and being ranked #1, they are the defending champions and currently the best team in the country.

Oklahoma went into the Big 12 Championship game knowing that if they WON, they would be IN. They were EASILY able to take care of TCU and punched their TICKET for the Playoffs. Oklahoma is led by the probably Heisman Trophy winner, Baker Mayfield, so there was NO DOUBT that the committee would leave out the BEST and MOST EXCITING player in College Football,

Georgia had a HICCUP late in the Regular Season after getting blown out by Auburn at home, but LUCKILY for them they were able to face Auburn again in the SEC Championship game and I would have been SHOCKED if the winner of yesterday’s game did not get IN. Georgia DESTROYED Auburn this time around the Bulldogs are on their way to the Playoff.

Going into last night, we knew ATLEAST two of the four teams in Oklahoma and Georgia. Clemson was scheduled to play at night, but the winner of their game against Miami would have gotten into the Playoff, so the only game that really mattered was the Big Ten Championship.

The committee has shown in the past that they DO NOT want to put in a two loss team, but they have also said that they “VALUE” conference championships, so the debate came down to Alabama, who did not play this weekend, Ohio State, and USC, who comfortably won on Friday Night in the Pac-12 Championship game. The committee showed that is more important for them to not put in a TWO loss team so they put in a 1-loss Alabama marking it the first time that a conference had TWO teams IN the Playoff in the four year history of the College Football Playoff.

I have NO PROBLEM with the selection of Alabama, as I do think they were the FOURTH best team in the country, but my big issue with the committee surrounds UCF. I have been mentioning UCF in my blogs for WEEKS now, but they were not even ranked in the TOP 6 of the final rankings which is blasphemous. UCF has more QUALITY wins than Alabama but UCF was not even considered for the Playoff.

TWO of the Power Five conferences and an undefeated Group of Five team were left out of the Playoff, and I think this year will start laying the groundwork for a possibly EIGHT team Playoff in the NOT TO DISTANT future, but until then we have to DEAL with the current system.

I will have my PICKS for the a lot of the Bowl games, so be on the LOOKOUT for those blogs.